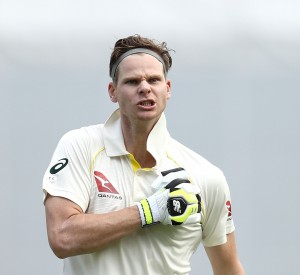 Having made his Australian debut as a 20-year-old, Steve Smith has undergone a dramatic career transformation. Now one of the world’s best batsmen, Smith admitted that he wasn’t ready for Test cricket when he was thrown in the deep end in 2010.

Having been sent back to domestic cricket to regain his form and confidence, Smith returned to the Test side with a bang in 2013, scoring 92 against India in Mohali to earn a late call up to Australia’s Ashes touring party where he made his debut test century posting an unbeaten 138 in the fifth Test at The Oval. He followed it up with brilliant centuries in Perth and Sydney in Australia’s Ashes sweep, before recording another hundred against South Africa.

The summer of 2014/15 was a season that Steve will never forget. He was named Australia’s vice-captain in December 2014 and Australia’s 45th Test captain, to replace the injured Michael Clarke during the final three Tests of the series against India. His series of 769 runs at average 128.17 saw him break numerous records along the way, win two man of the match awards and was named player of the series. In 2015 he was named Allan Border Medallist as the best player in Australia for the year as well as being named the Test and ODI player of the year & hit the winning runs in Australia’s World Cup victory at the MCG. He was also named ICC International Player of the Year.

In 2015 Steve was named Australia’s Captain and has gone on to break record after record along the way. In 2017/18 he captained Australia to a 4 nil victory over England to reclaim the Ashes and was named Player of the Series with an amazing batting performance that had many comparing him to the great Don Bradman. He was named Allan Border Medallist for the 2nd time as Australia’s best player for the year and the International Test Player of the Year.

In 2019 Steve made a comeback into the Australian Test team for the Ashes in the UK with amazing results. During his comeback match he scored 144 and 142 in Australia’s win at Edgbaston be for going on and scoring 744runs for the series at an average of 110.57 and was named man of the series.

In 2021 he was named Allan Border Medallist for the 3rd time as well as being named ODI player of the year.