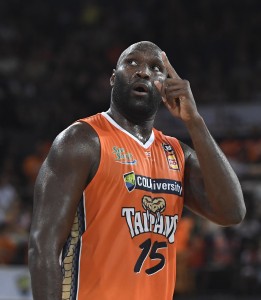 Standing at 6 foot 10 inches tall Nathan “Nate” Jawai is a force to be reckoned with in the paint. Known to be an extremely tough, physical match Nate causes problems down low for the opposing team.

Making his debut in 2007 NBL season for the Cairns Taipans, Nate was a beast. Posting 17.3 points and 9.4 rebounds in his debut season and was awarded the Rookie of the Year award, All NBL-Second team and NBL All-Star Game MVP.

In 2008, Nate was selected by the Indiana Pacers in the NBA draft. His rights were then traded to the Toronto Raptors. Making his debut against the Detroit Pistons on the 21st of January 2009, Nate made history by becoming the first Indigenous Australian to play in the NBA. Picked up by the Minnesota Timberwolves in 2009, Nate was given a bigger role and saw an increase in minutes and productivity.

Nate then moved his talents to Europe, signing with Serbian team BC Partizan in 2010, where Nate helped his team to win the Domestic Title and the Adriatic League Championship in 2011. Nate then went on to play in Russia for Unics Kazan before signing with the Spanish juggernaut FC Barcelona in 2012.

Nate made his return to the NBL in 2015, signing with the Perth Wildcats. An impressive return season saw Nate sign back with his first NBL Club, The Cairns Taipans.

Nate has become a fan favourite in the NBL for being one of the toughest, physical match ups to play in the league.