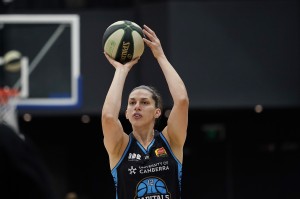 A tough rebounding centre with a soft shooting touch, Marianna Tolo is a star in Australian basketball. Marianna is a three time WNBL Champion, three four time FIBA Oceanic Champion and an Olympian for the Australian Opals.

Starting her basketball journey at the Australian Institute of Sport in 2006, Marianna made an immediate impact as one of the best young bigs in the WNBL. Her performance in her rookie season captured the eye of national selectors where she would go on to represent Australia in the FIBA under 19 World Championships in 2007.

Marianna then made the move to the Canberra Capitals in 2008 a where she won back-to-back championships in 2009 and 2010 and was named in the Australian National side in the 2010 FIBA World Championship.

After two more seasons in the WNBL, Marianna signed with French club Aix-en-Province in 2012 and captured a spot in the Opals for the 2013 FIBA Oceanic Championships.

Another impressive season in France for Bourges Basket caught the eye of scouts around the globe. Tolo Marianna took her experience and determination on both ends of the court to the WNBA to play for the Los Angeles Sparks in 2015.

In 2016, Marianna was selected to represent the Australian Opals at the Rio Olympics. Following her imposing performance at the Olympics, she returned home to the WNBL to play for the Canberra Capitals claiming championships in 2019 and 2020.