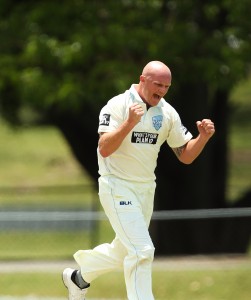 An extremely hard-working fast bowler, Doug (Douggie) Bollinger was and always will be an icon of Australian cricket with a cult following for his loveable personality and passion.

Debuting for New South Wales in 2002, Doug represented the Blues until 2018 when he announced his retirement.

Playing for The Sydney Thunder, Hobart Hurricanes and the Sydney Sixers in the Australian Big Bash League, Doug was a top tier bowler in the competition. Doug would go on to have an impressive international career in all forms of cricket. Playing for Worcestershire and Kent in county cricket and representing the Chennai Super Kings in the IPL from 2010 to 2012 which included an IPL Championship.

Doug earnt his long deserved his Test debut against South Africa in 2009 and would play 12 Test matches for Australia finishing with an impressive bowling average of 25.92.

In 2018, Doug announced his retirement from all forms of Cricket.