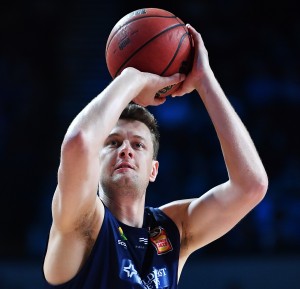 Standing at nearly 7-foot-tall, Daniel Johnson is a big man with a soft shooting touch.

After a short stint at the Australian Institute of Sport Daniel moved to the US to play for Pepperdine University before returning home to represent the Australian Emus at the 2007 FIBA Under-19 World Championship.

In 2008, Daniel signed with NBL side the Melbourne Tigers. In his rookie season Daniel helped the Tigers to the NBL Finals. After two seasons with the Tigers, Daniel signed with the Adelaide 36ers in 2010. During his second season with Adelaide, he was awarded NBL Most Improved Player Award and was named to the All-NBL Third Team. In the 2012/13 season, Daniel led the NBL in rebounds on his way to All-NBL second team honours. During the 2013/14 seasons, Daniel led the Adelaide 36ers to the NBL Grand Final, earnt All-NBL First team honours as well as winning his third straight team MVP Award for the 36ers.

After a stint in Poland in 2014-15, Daniel returned to Adelaide, immediately leading the NBL in rebounds during the 2015/16 season on his way to his second All-NBL Second team selection. Daniel lead the 36ers to the best record in the NBL during the 2016/17 season and the NBL Finals in the 2017/18 season earning his second and third ALL-NBL First team selections.

In 2018, Daniel was named captain of the 36ers. He went on to earn the team MVP award for the 2018/19 season as well as making the All-NBL Second team for the third time in his career.

In 2019, Daniel made his national representative debut, playing for Australia at the FIBA Basketball World Cup qualifiers. During the 2019/20 NBL season, Daniel played his 300th NBL game and captured his fifth team MVP award for the Adelaide 36ers.

Daniel has also had an extensive career outside of the NBL, playing in Puerto Rico, New Zealand, Iran, Argentina, and Japan.