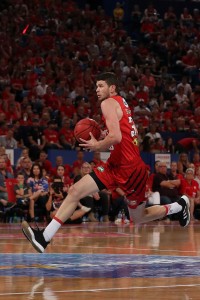 A real sharpshooter at the forward position and standing at 6 foot 5 Clint Steindl is unfazed by defensive pressure.

Clint emerged as an undeniable young talent in Australian basketball back in 2007 when he joined the Australian Institute of Sport. After two years at the AIS, he moved to the United States where he attended St. Mary’s College from 2008 to 2012.

Following his success at college Clint signed a two-year deal with the Cairns Taipans making his presence felt as a three-point specialist and a defensive stopper.

Continuing his impressive development, Clint signed with the Townsville Crocodiles in 2014. After taking a huge leap in his second season with Townsville he was named the 2016 NBL Most Improved Player.

After the 2016 NBL season, Clint moved his skillset overseas representing Belgium club Leuven Bears and then Greek Club Panionios BC in 2017.

The end of 2017 saw a return home to the NBL joining the Perth Wildcats where he would go on to become a back-to-back NBL Champion in 2019 and 2020. Clint was awarded the Perth Wildcats most improved player for the 2019-20 NBL season.