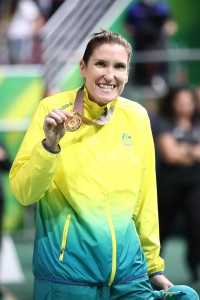 Debuting for the Australian Institute of Sport back in 1998, Belinda made history in 1999 as she led the AIS to the WNBL Championship. In 2000, she made the move to Sydney where she would claim her second WNBL Championship by the age of 20 in 2001.

In 2004, Belinda earnt a spot on the Australian Olympic Team for the Athens Olympics where she led the team to the silver medal. The international exposure saw Belinda sign with WNBA team, the Phoenix Mercury in 2005 where she would go on to win the WNBA championship in 2007.

Gold Medals at both the Commonwealth Games and the FIBA World Championships capped off an incredible 2006.

Several years playing overseas between 2007 and 2011, Belinda claimed championships in Spain and France as well as a few quick stints in Russia and in the WNBA with the San Antonio Silver Stars and the Seattle Storm.

Belinda would claim Silver in the 2008 Beijing Olympics and Bronze in the 2012 London Olympics.

Returning to the WNBL in 2011 for the Sydney Uni Flames Belinda continued her amazing career. Belinda would claim her third WNBL championship with the Bendigo Spirit in 2017 where she would retire in 2019.

Belinda now using her high basketball IQ and experience to coach the next generation of stars, signing as the Frankston Blues head coach in 2019.