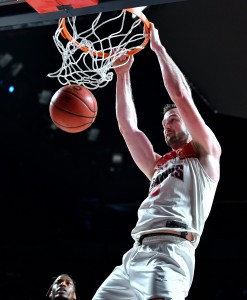 An experienced big man, AJ Ogilvy is an international talent who controls both ends of the court.

After two years at the Australian Institute of Sport, AJ committed to Vanderbilt college in 2007. In his freshman year in 2008, AJ was named to the SEC-All Freshman team and was named to the All SEC-second team for three years straight, from 2008 to 2010.

After leaving college AJ signed with Turkish team Beşiktaş for the 2010/11 season, where they would go on the win championship before moving to Spanish team Valencia for the 2011/12 season. In 2012, AJ signed in Germany with Brose Baskets for the 2012/13 season concluding his first European stint with another championship.

Returning to Australia in 2013, AJ signed with the Sydney Kings for the 2013/14 NBL season instantly dominating, leading the league in rebounds and blocks as well as averaging over 13 points per game, earning him a selection in the All-NBL First Team.

Following his first NBL season, AJ returned to Europe to play for Spanish club Manresa for the 2014/15 season before returning to Australia to sign with the Illawarra Hawks where he has been since.